The Shining- So it’s not a controversial opinion to call this a great classic horror film. I understand that diehard King fans sometimes don’t respond well to it as it’s not exactly true to the book, but setting that aside it’s a great suspenseful messed up horror flick.

Scream 4- Hands down my favorite sequel to Scream. It captures what made Scream, Scream, and then modernizes it without losing too much of its heart. I am a huge fan of Scream and only slightly less a fan of Scream 4.

Train to Busan– One of the best zombie movies hands down. Emotional, suspenseful, brilliant.

It Follows– I thought this movie had a few pacing and character problems, so I wasn’t as on board the hype train as others. However, it’s a unique idea and has some terrifying moments.

The Ritual– Not a bad movie overall, not perfect but if you haven’t seen it worth a watch.

The Invitation– A hugely underrated horror film. It’s suspenseful, has a great climax, and one of the best closing scenes I’ve seen in a horror movie. Watch this.

The Witch- A pretty slow paced horror flick so it won’t be for everybody. However, it’s a solid watch and interesting.

Tusk– I am a huge defender of this movie. It is odd, uncomfortable, funny, terrifying, weird, and just so hard to single out exactly how I feel. That’s what makes it a great horror movie, you will be discomforted by it.

Cube- Lots of character development and a claustrophobic “trap” horror film. If you like the first Saw, you will likely like this one.

The Void– A great Lovecraftian body horror movie. I loved it and think more people should give it a go. 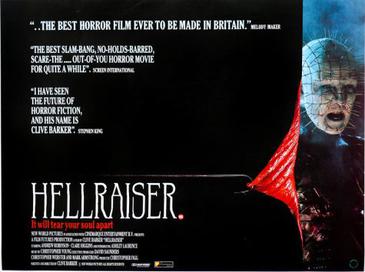 Child’s Play- I am not the biggest fan of this franchise overall, but I thought Child’s Play was a solid movie and had a few good scares.

The Blair Witch Project- I don’t think this movie has aged perfectly, but I think it’s an important one in the history of horror. Worth a watch

The Collector- I like this movie, it’s suspenseful, entertaining, has some good gore. I thought the follow up went way too over the top, but the first was solid.

Revenge– A good revenge flick and manages to toe the line with the sensitive subject without going too far. If you like artsy violent films, you should like this one.

Tucker and Dale vs. Evil- This is one of the funniest horror comedies I have ever seen. I cannot overstate how much I love this movie. Hilarious.

The Perfect Host- This is a weird one but a good one.

The Wicker Man- The original Wicker Man, has not aged perfectly, but it’s still solid and worth a watch. Also pretty creepy.

Psycho- Again an American classic. I love this movie.

Carrie- Carrie is a good, but rather sad horror movie. It’s hard not to feel for Carrie but when she goes off…

Henry: Portrait of a Serial Killer- As far as serial killer movies go I think Henry is often overlooked. It’s a well-made movie that focuses heavily on the killer. Also Michael Rooker

The Cell- I said once that I believe if this movie had been released about 10 years later it would have been a classic. It’s not perfect, but it’s a compelling movie and has impressive visuals.

The Relic- This is one of my favorite creature features, it’s just kind of a fun movie. Give it a go.

© Megan E. Pearson and megan-e-pearson.com, 2015-2020. Unauthorized use and/or duplication of this material without express and written permission from this site’s author and/or owner is strictly prohibited. Excerpts and links may be used, provided that full and clear credit is given to Megan E. Pearson and megan-e-pearson.com with appropriate and specific direction to the original content.