So this is probably going to be a bit of a surprise, but my experience with horror games is pretty limited. I love horror, if you read the blog with any regularity, you have likely figured that out. I even love horror games, but they are more difficult than horror movies. The experience of a movie is more passive; in games, you have to push yourself forward, drive yourself into more terrifying things. It can be a challenge for someone like me. Yet, I also love it. That fear, that intensity, never knowing what is next, the unsettling feeling you get, and the lingering fear that follows you. These are a few of my favorite horror games.

Yes, I know there are a lot of horror hits missing from this, largely because many of them I have limited experience playing firsthand and more experience watching. I need to rectify that. I also purposely tried to include a few games that don’t often get featured on favorite horror lists, not all of them fall into that, and all of them are favorites, but we hear a lot about certain games and little about others.

Inside was the follow up to the popular game Limbo. Now some would argue that it is the weaker of the two, or that it’s not a true horror game. I, however, think that the themes, tone, and art really settle it into the horror genre. Beyond that, the girl in the water is possibly one of the scariest things I have ever faced in a game. As for whether or not it’s better or worse than Limbo, I think they are both excellent games, and it comes down to personal preference. My preference is Inside.

An FMV game from Wales Interactive, in The Bunker, you play the last surviving member of a bunker. The character is obsessed with sticking to the routine his mother gave him to help him survive, but as things start to go wrong, he realizes he can no longer rely on it. He also begins to piece together the truth of why he is alone. Not the scariest game, but it has some thrills and is an interesting, albeit not perfect, experience.

Wonderful soundtrack, completely scary, creepy, and disturbing, this game was just beautiful to me in so many ways. The art was also impeccable, and the fact that pieces of it reminded me of older Tool art and videos was just extra icing on the cake. I loved this game and hated it so much because damn did it get to me in the best/worst ways.

I Have No Mouth and I Must Scream

Let’s be honest for a lot of modern gamers point and click games can be hard to nail it for horror. You aren’t running away and dealing with jump scares, and instead, the games have to rely on tone and themes to get to you. I Have No Mouth is based on an equally impressive short story and follows four people through what is basically their personal hell. It is intense, sad, and deeply unsettling. It might not make you scream like some games, but it will likely still get to you.

Bioshock, especially with its follow-ups, has sort of lost the horror subgenre title. Still, this is my list, so I say it counts. The game is easily one of the best from that generation of games and remains one of my tops. It has plenty of disturbing characters and moments, and even a few good jump scares to get you. The climax was a bit of a letdown, but otherwise, I loved this game from start to finish.

Oh, look another point and click game. The Cat Lady is a messed up game. There is no other way to put it. It deals with a lot of extremely f*cked up situations and scenarios and is pretty relentless. You’ll have a few intense moments of having to solve things quickly and with precise timing, or you will die, which can add to the fear, but mostly, the game is just horrific in tones and theme, which makes it impossible to ignore as a horror game. 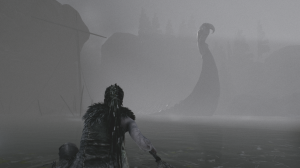 Considering Hellblade is ultimately a game about mental health, the fact that it was a dark, and at times, truly terrifying game could have really pushed it to a bad place. Instead, we got a beautiful, dark, upsetting, and reflective look at mental illness and the struggles of those facing one. It is not overtly a horror game, but again themes really drive it there, and it has more than a few moments that will get the heart racing for many people.

This is mostly an entry to give credit to the many horror games attempting to make horror a multiplayer experience. Friday the 13th and Dead by Daylight also deserve a lot of love. However, the Left 4 Dead games are among my favorites, and I have yet to stop returning to them because they are just damn fun. I would love to get a third, but then we’ve all heard the “valve and trilogy” jokes.

© Megan E. Pearson and megan-e-pearson.com, 2015-2019. Unauthorized use and/or duplication of this material without express and written permission from this site’s author and/or owner is strictly prohibited. Excerpts and links may be used, provided that full and clear credit is given to Megan E. Pearson and megan-e-pearson.com with appropriate and specific direction to the original content.